When you think of AFL Footy; think of hamstring injuries.
The big muscle at the back of the thigh between the buttock and the knee comprised of three separate muscles- Biceps Femoris, Semitendinosus, and Semimembranosus, is one of the most injured muscles of the body. 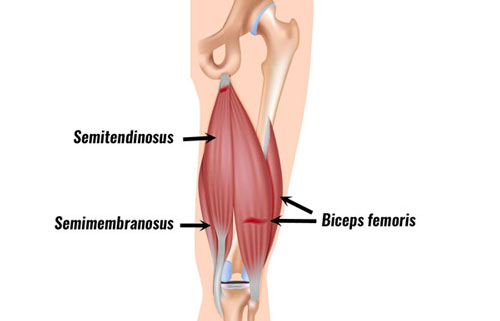 According to AFL statistics it represents 15% of all injuries, has the highest reoccurrence rates and causes 20% of missed games at the very elite level. Here at Elizabeth Street Physiotherapy it is the number one muscle injury that we treat.
There are many different factors that influence the susceptibility of hamstring injuries which include:
(a) Anatomical Factors
• Poor Flexibility/Length of the hamstring muscle
• Poor Strength in the hamstring muscle
• Muscle Fatigue
• Imbalance between the Quadriceps and the Hamstring muscle: The Quadriceps is a very large, strong group of muscles at the front of the leg which straighten the knee. This can forcibly overstretch the hamstring, increasing strain and possibly tearing the fibres.
• Poor Balance
• Lumbar spine tightness/pain: The Lumbar spine and Hamstring are intimately connected. If the Lumber spine is tight or painful it will influence the position of the pelvis. As the Hamstring attaches to the pelvis at the Ischial Tuberosity ( the point of bone on which we sit on), it can assert tension on the hamstring fibres placing it at a higher risk of injury through overstretching.
• Neural Tightness: The sciatic nerve supplies and runs down through the Hamstring. It can become tight, pinched or irritated through lower back stiffness or injury, buttock muscle tightness and even Hamstring muscle tightness itself. This can create further increased tension in the muscle fibres of the Hamstring again placing it at a high risk category of tear.
• Previous hamstring injury: When a muscle is previously torn, the mechanism of repair involves production of scar tissue which is not quite as flexible or strong a tissue as the original Hamstring. The tissue repair is often disorganised and adhers to other muscle fibres therefore placing it at a higher risk of re tear.
• Age: As we age our muscles become shorter and smaller. There are less muscle fibres and the tissue itself becomes more fibrotic causing an increased risk of injury.

(B) Environmental Factors
• Technique: A sudden change in direction and speed with either acceleration or deceleration places the muscle fibres under increased load and is the most common reason for injury. Poor running and kicking technique can increase the load on the muscle leading to fatigue and injury in the susceptible Hamstring.
• Inappropriate/Inadequate or no warm up.
• Poor playing/training Surface: For example a wet and slippery surface increases the tension, torsion and load on muscles in general as they react to a sudden loss of balance.
• Cold Weather: Cold weather causes muscles to lose heat, contract and tighten therefore increasing the risk of injury. Joints in cold weather also stiffen reducing the range of movement and therefore length of a muscle. This places the muscle at a higher risk of tearing. The muscle could also be damaged as it will work harder to move a stiffer joint .This over-contraction leads to overload and strain of the muscle.

There are different ways in which the Hamstring can be injured.
The most common is a strain or tear. Strains are divided into grades of severity.

Grade One: A grade one strain is commonly known as a pull where there is minimal fibre disruption. The player will notice tightness in the muscle, however they will be able to walk normally but not run at full speed. There often is minimal end range restriction to movement and muscle strength testing produces minimal or no pain. Typically, the grade one strain will take 1-2 weeks to recover.
Grade Two: A grade two strain involves more muscle fibres with partial tearing. Commonly the player will limp and is unable to run or kick. There will be obvious swelling and often bruising and a lump/tightness in the muscle fibres. There is often spasm initially. There is obvious restriction of movement and decreased strength due to pain. The grade two strain can take 2-4 weeks to recover.
Grade Three: A grade three strain is a complete rupture of the muscle. There can be initial severe pain and spasm but this can progress to just a feeling of weakness and difficulty with walking often requiring the use of crutches. This can take 3-6 months to heal and may need surgery.
Typically the player when injuring their Hamstring will feel a sudden pain at the back of the thigh, occasionally depending on the severity there may be a snapping or popping sound. Usually, the player will find it difficult to extend the leg to walk, run or kick.
Other types of injuries include Hamstring Tendinopathy and Hamstring Hypertonicity which is a condition where the muscle continually feels contracted and tight. Delayed Onset Muscle Soreness or DOMS is also common in the Hamstring muscle.
Hamstring Tendinopathy. A tendon joins muscle to bone. The Hamstring has tendons that attach to the pelvis and also the knee. Localised pain in the Hamstring near these attachments which can occur without trauma and which traditionally occur over a period of time and through overuse is most likely a tendinopathy. The tendon of the Hamstring can become inflamed, shortened and painful. The player often experiences pain at the start of training or playing but can continue. Pain and dysfunction returns after the player cools down and will often have increased symptoms of pain and tightness on waking the next morning.
Hamstring Hypertonicity is seen when there is no apparent trauma, no area of specific damage to the muscle or tendon but the player feels continued tightness long after an activity. The Player feels his muscle is continually contracted like they have just run a marathon. The player will often feel and see an increase in the size of the muscle or notice that the muscle is firmer and tender to touch. There is usually no pain or spasm but the player often has a history of multiple strains of the Hamstring. The key to success with resolving these problems lies not with simple stretching which is usually what the Player feels like doing all the time, but in combining muscle tension reducing tension techniques (massage, rolling etc.) and an isometric and eccentric muscle conditioning program which we can assist you with here at Elizabeth Street Physio.
Delayed onset muscle soreness (DOMS) is a condition whereby soreness and tightness in the muscle occurs the day or days after an activity. This is often associated with beginning training again or an increase in a training routine and relates to poor conditioning. DOMS resolves usually by itself with rest after 3 days.
Why does Hamstring injuries occur so often In AFL players?
The answer lies in the biomechanics required for playing the game. It is the degrees of power, speed and agility combined with the amount of running and kicking that creates the environment for muscle injury. Add in the anatomical nature of the Hamstring muscle and you have a recipe for a high risk of injury.
In kicking , Hamstring injuries occur when hip flexion and knee extension occurs at the same time. This places the hamstring under a large strain causing the potential for tear.
During sprinting and running, Hamstring injuries occur at the end of the swing phase when muscles are actively lengthening and decelerating the limb. This torsion in the muscle places the fibres again under a significant load which can potentially lead to a tear.
Prevention is always better than cure.
The steps to take for better prevention include;
1) Ensure a proper warm up .Stretch and warm up your muscles appropriately.
The best exercises include:

a) Lie on back. Using a towel or tubing, place end over foot and whilst keeping knee straight lift leg up. Hold 10 seconds feeling strain but not pain and repeat 5 times.
b) Lie on your back again using a towel or tubing around the foot this time pull your thigh to your chest keeping the knee bent. Extend your leg keeping the knee to your chest. Feel a strain not pain .Hold for 10 seconds and repeat 5 times.
You can heat up the muscle more by the use of heat creams and oils.

2) Ensure that the length and strength of the muscle is conditioned to playing football and importantly at the level the player is expected to play at.
3) Assess the conditions. The use of skins can keep the muscles warm during the game if you are playing in colder conditions.
Rehabilitation.
The treatment of injured Hamstring muscles obviously depends on the extent of the injury. The basic principles include;
a) R.I.C.E initially (Rest, ice, compression and elevation- see Physio tips section on our website for further information).
b) Reduction of swelling and pain.
c) Regain Full Range of Movement with stretching.
d) Regain Full Strength with appropriate Exercises including
-Isometric: Lie on back push heel into floor, holding for 10 seconds.
-Eccentric: Lie on stomach and lift leg up in air slowly lowering leg taking 10 seconds to
lower.
-Nordic: In a kneeling position with ankles anchored slowly bend forwards and hold
position. These exercises should be checked for appropriateness depending on
stage of recovery.
If you have a hamstring injury or need further information contact Elizabeth Street Physiotherapy on 95703996

Arthritis and Winter: Whether the Weather Causes Pain in Arthritic Joints!NAVIGATING THE PILLOW AND MATTRESS MAZE

GOOD MORNING, BAD NECK PAIN PART 1: PAIN IN THE MORNING, WHAT HAVE I DONE?

Serving up Tennis Shoulder Pain – Getting Back on the Court

Has your shoulder pain not resolved? Your thoracic spine may be involved…