You are here: Home / Uncategorized / Arthritis and Winter: Whether the Weather Causes Pain in Arthritic Joints!

“Oh the weather outside is frightful, 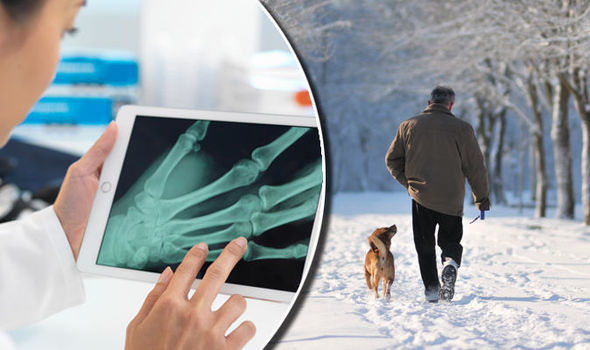 But the fire is so delightful,

And since we’ve got no place to go,

This could be the new anthem for Arthritis sufferer with winter on its way.

Stay out of the cold and keep warm!

According to Arthritis Australia, 1 in 6 Australians have Arthritis which equates to 3.9 million people.

Arthritis is a condition that affects the musculo skeletal system in particular the joints of the body. Whilst Arthritis can occur anywhere in the body it affects predominantly, hips, knees, hand and the spine.

There are many different types of Arthritis including Osteoarthritis, Rheumatoid Arthritis, Inflammatory Arthritis such as Ankylosing Spondylitis and Psoriatic Arthritis. It is most commonly thought of as a condition which affects the elderly but children can have a form of Arthritis called Juvenile Idiopathic Arthritis.

Where a change in the weather is concerned Osteoarthritis and Rheumatoid Arthritis are the most commonly discussed and we will concentrate on them for the purpose of this blog.

Osteoarthritis is the most common type of arthritis and is thought to occur due to over use “ Wear and Tear “ whereby the whole joint , bone , cartilage, capsule , ligaments and muscles wear and break down leading to predominantly joint pain and stiffness with swelling a secondary factor. It generally occurs insidiously over many years but can originate from trauma.

A single joint can be affected by Osteoarthritis and can appear larger in size due to swelling but also due to bony spurs that develop on the edges of a joint called osteophytes. Recurrent or chronic pain in the joint leads to muscle wasting around the joint which then can become painful, stiff and weak.

Recent studies suggest that Osteoarthritis is now thought to be due to a joint over working to protect and repair itself but that is an argument for another blog.

Rheumatoid Arthritis is an autoimmune disease whereby your own immune system attacks and breaks down tissue, especially the tissue lining your joints called the synovial membrane. The damage leads to painful swelling that results in bony erosion of the joint often leading to joint deformity. Unlike Osteoarthritis, Rheumatoid Arthritis tends to affect joints on both sides of the body and usually starts with the smaller joints like in the fingers and toes.

Now, back to the weather!

There are significant conflicting studies regarding the effect of cold weather on arthritis (see table at the end of this blog).

Whilst the experts cannot agree ,anecdotally at Elizabeth Street Physiotherapy we find that in May / June , when the weather gets colder, there is a definite increase in patients coming in with acute arthritic episodes and interestingly another similar spike in September/ October again when there is a further weather change from cold to hot.

Wading through the down pour of evidence there seems to be several theories on how weather may influence Osteoarthritic pain. These Include:

Barometric pressure, also known as atmospheric pressure is a measure of force exerted on a surface by the weight of the atmosphere (Gravity) at a particular point.

Changes in Barometric pressure occur as weather patterns / fronts move across the surface of the earth.

But how does changing external atmosphere pressure affect the body?

The human body has a large amount of fluid in it. In fact, 45-65% of the body contains water. In the joints of the body, the fluid is called synovial fluid. The purpose of which is to reduce friction between the surfaces of the bones moving on top of each other. Just like a lubricant in a motor.

The Barometric Pressure Theory suggests that a change in outside barometric pressure that can occur with a weather event affects this equilibrium. An Arthritic joint can feel a barometric pressure change and the person feels pain. Like that scene in the movies when the elderly person begins to rub their knee. ”There`s a storm coming.”

To consider this in another way, consider a mercury barometer (temperature gauge) where barometric pressure from outside pushes down on the fluid mercury inside the gauge causing this fluid to rise. The higher the barometric pressure, the higher the internal hydrostatic pressure increases and we see that the mercury inside the gauge rises. Therefore we can tell the temperature has increased.

The effect on the body in Wintery conditions is that as the barometric pressure externally drops in the cooler, stormy weather there is a change in the hydrostatic pressure internally causing tissues in the body to expand. Pressure is exerted on nerve receptors that controls our pain signals and we feel pain. The synovial fluid thickens which affects the joint making it more difficult to move and decreasing joint range of movement. The joint becomes stiff and painful just like what we feel in an arthritic episode.

But why doesn`t everybody feel pain when the weather changes? Studies have revealed that in arthritic joints especially in Rheumatoid Arthritis there is already an increased volume of fluid in the joints with a subsequent increase in intra- articular (hydrostatic pressure). Along with this is that one of the major changes seen in X-rays of Arthritic joints is that the space between the bones become narrower with again a change in the internal hydrostatic pressure. A narrower joint filled with more fluid makes those with arthritis more susceptible to temperature change.

There is much controversy with these deductions. A Senior Lecturer at Deakin University School of Medicine and Pain Specialist, suggests that whilst extremes of barometric pressure can influence the body with production of joint pain such as when going to the top of Mount Everest or diving off 50 meters, minor fluctuations at  normal altitude such as which is seen in normal weather conditions are less likely to produce pain. Otherwise we would have pain every time we drove up to the Dandenongs.

The Hibernation Theory suggests that with colder, stormy weather people are less inclined to go out and exercise.

It has been well documented that higher risk factors for developing Osteoarthritis include obesity and decreased activity.

The synovial membrane which lines a joint produces synovial fluid when it is stimulated by movement. The synovial fluid as reported before is the lubricant which assists in keeping the joint surfaces slippery and when viscous (fluid-like) allows good range of movement.  The lining of the bone cartilage has no blood supply and relies on the synovial fluid for its oxygen and nutrition for good health. When a joint moves pressure changes and causes fluid to move in and out of the joint like a pump.

Therefore as you are less inclined to exercise when the weather is cold or wet, you move less allowing less lubrication of the joints promoting increased joint stiffness which can lead to cartilage break down, possible pain and Arthritis.

One of the major themes of arthritis Australia is “Move It or Lose It”. Referring to the fact that physical activity improves joint movement and relieves arthritic pain. Exercise releases “Feel Good” chemicals in the body such as endorphins which help block the feelings of pain. Obviously some exercise may not be beneficial such as heavy weight bearing exercising (running, jumping, hopping or ballistic style exercises). Yoga, Tai-Chi, Pilates and other exercises which are less weight bearing such as swimming, hydrotherapy or bike riding can be beneficial.

The Mind-Body Connection Theory suggests that in warm weather you feel better psychologically and therefore physically you will feel better too.

The George Institute for Global Health in Australia in their study found that in 345 people with Osteoarthritis there was no association of pain with temperature, humidity, air pressure, wind or rain. They concluded that people are very susceptible to the notion of pain such that on colder days people might take more notice of pain and report it than on bright, cheerful, sunny days.

Voting with their feet!

Interestingly, when you compare the demographics of certain areas in Australia a pattern appears.

Port Macquarie, which is 385km north of Sydney, has been cited as the area with the most stable climate in Australia. The demographic of people aged over 65 years in Port Macquarie is 27.7%.

In Collinsvale , Tasmania which has been cited as the coldest place in Australia, the demographic of people aged over 65 is 11.6%.

Definitely, people aged over 65 are voting with their feet to warmer and more stable climates and who knows this may just be to avoid Arthritic pain in colder weather.

In our next blog we will look at the best exercises for Arthritic sufferers.

If you would like further information on coping with Arthritis, call the practice on 9670 3996.

Spring is Coming and So Is Gardening!AFL INJURY SERIES

GOOD MORNING, BAD NECK PAIN PART 1: PAIN IN THE MORNING, WHAT HAVE I DONE?

Serving up Tennis Shoulder Pain – Getting Back on the Court

Has your shoulder pain not resolved? Your thoracic spine may be involved…