You are here: Home / Aches & Pains / GOOD MORNING, BAD NECK PAIN PART 1: PAIN IN THE MORNING, WHAT HAVE I DONE? Pain that wakes you at night or in the morning is a common neck complaint. There are many possible reasons but musculoskeletally the main reason is because you have slept in a poor position.
Anatomically the muscles that extend from the trunk to the neck are the most likely to be strained or torn, from the neck being positioned poorly overnight. 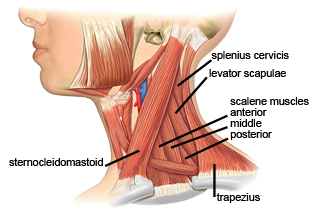 Muscles get torn with movement usually and whilst we might twist and turn at night we are mostly still. So how does the muscle strain?
Traumatic tears such as suddenly sprinting or decelerating, over contracts or poorly contracts the muscle leading to tearing fibres, inflammation, pain, restriction of movement and dysfunction.
Now ,imagine if you were to stand on the outside border of your foot. After a few minutes you will want to get off because you will be experiencing pain. If you stand for long enough you would end up with exactly the same symptoms as the traumatic tear. This type of tear is called a postural strain.

At night we want our head to be in as close a position as how we stand or sit upright during the day. This is called the neutral or lordosed position where the neck is inwardly curved.

Sleeping with the head twisted or bent forward or backwards too much changes the lordosis and can create enough stretch to pull on the muscle.
This can either tear the fibres outright leading to you waking in the middle of the night in pain or the more prolonged strain can lead to micro tearing of the fibres often where the muscle joins the bones of the vertebra.Micro tearing causes the fibres to contract and thicken which in turn can compress / constrict the vertebra preventing the two bones from gliding on each other. When the bones move they release fluid which helps the joint glide. Compressing or restricting the joints decreases the production of this fluid and in turn this decreases the movement of the joint.
Initially you may wake in the morning with just a stiff neck but repeating this over several nights can lead to bigger tears, inflammation and more serious pain, stiffness and dysfunction.

Poor positioning can also lead to injury of the cervical (neck) vertebral joints. The disc in the neck lies between two bones of the vertebra and acts as a cushion. The disc being spongy also allows fluid, multidirectional movement to occur. Placing your head in a hyper-flexed (overly bent forward) position can cause enough increased pressure in the disc to create a tear and even a Herniation/ Bulge. Commonly you would wake with serious neck pain, markedly reduced movement and often arm and hand symptoms such as pins and needles, referred pain, and weakness as the bulge presses on a nerve.

The facet joint of the neck is an area where the two vertebrae come together at the side of the neck.
An overly rotated neck places joints under strain, over stretching the ligaments, capsule and muscular attachments. This usually creates pain on one side of the neck and an inability to turn and stretch in one direction.

Other symptoms in the neck that you can wake up with, includes muscle spasming. Torticollis, acute wry neck or the ubiquitous “Crick in the Neck” are examples of pure muscle shortening or spasming when the muscles react to being put in an awkward position.
Headaches in the morning are 2-8 times more common among people with sleep disorders. It is usually caused when the position of the head compromises the upper joints of the neck such as the head being placed in an overly extended (bent backwards) position. This irritates the upper nerves of the neck which supply the head and creates a headache.

Jaw pain associated with neck pain is another common morning symptom whereby grinding of the teeth overnight creates vibration to the cervical spinal joints leading to pain. Continual muscle movement of the jaw leads to increased tension and fatigue of jaw muscles and the muscles of the neck. Again that tension can lead to tighter muscles and tears.

The common denominator in all of these injuries is that we have slept in a poor position, either lying on our stomach or using a pillow incorrectly.

In the next instalment we will talk about the ‘Goldilocks Zone’ of pillow positioning and how to treat your neck pain and other symptoms immediately.
If you are experiencing any of these pains or symptoms call Elizabeth Street Physiotherapy on (03) 96703996 and speak to one of our Physiotherapists about immediate treatment.

Arthritis and Winter: Whether the Weather Causes Pain in Arthritic Joints!

Turning the Office Athlete into the Home Olympian!

Winter Joint Pain and How to Manage it.